Wow !! Did you hear the news that Pamela Anderson is going to enter Bigg Boss 4 ?? I mean is it really going to be ‘ The PAMELA ANDERSON ‘ , ‘ The BAYWATCH ‘ star ?? .   If this news true then i guess the TRP ratings would be at its best for this Show .

There have been too many twists on this show already. First, Entry of The Great Khali , i think Big Boss 4 would be a place i would least expect him to be in. Then Dolly Bindra’s Wild card entry, who turned the place into a complete Mess. Man! She needs to control her anger and not to mention her Voice too 😛 . Hasn’t she fought with almost everyone in the house ??. Anyways then , Ali Merchant, who came in to sought out his differences with Sara,  ended up  marrying her inside the Bigg Boss House. That was weird and Silly too .Rahul, one of the few , not so vicious types is out (i was hoping him to stay till the last) and Now Anchal too . Veena is just happy flirting with almost everyone in the house and seducing her way to glory . God Knows whats wrong with Seema, She faints and remembers nothing about it. And , Amidst this , If Pamela Anderson enters the house, I am sure the house would be on Fire. Why not ? The lady is so hot 🙂 . The Ladies man Ashmit is going to be in a fix 😛 .

Anyways i had a hard time  finding a suitable picture of Pamela Anderson. My blog being G rated is not a proper place for such pictures 🙂 . I mean you can only find nude or almost Nude pictures of her 🙂 .So yeah, You can appreciate me for that 🙂 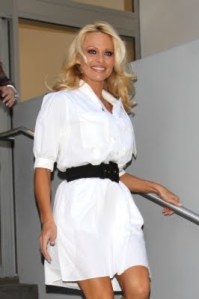 The Great Khali , Dolly Bindra,  Pamela Anderson . Whats next ?? I would not be surprised to Paris Hilton appearing on the show 😛 .  They have got some Real Crazy brains Working behind the show.